I’ve taken a lot of drugs in my life, but nothing gives me a better high than watching a sweet deal go down on HGTV’s House Hunters.  That show is, without a doubt, quite possibly somewhere in the top 6 for shows currently on television. The great thing about House Hunters is that it’s a show that fits any mood. Some shows can’t grab your attention unless you’re in the mood to watch some creepy soulless ginger figure out a murder. But House Hunters knows no limits. About to rage on a Saturday? Choke down a gin and red bull while watching an episode of House Hunters. Looking for an intimate night with you and the misses? Open a bottle of wine and throw on some House Hunters. But be careful, if you go this route you should be open to having children in the next 9 months. House Hunters is a known aphrodisiac.

I’m of the mindset that a good television show should be life altering. I was raised without parents so I had to learn all of my life lessons from television. Well, I had “parents”, but I was raised Buddhist, so they weren’t what you would call “parents”. It’s complicated. Sigh, Westerners…

HGTV is stacked to the max with powerful TV shows. Holmes on Homes? We’re talking homes on homes on homes. I used to think that show sucked, and then one day I took a step back and said, “wow, this show is about a giant ogre with a Canadian accent that demolishes people’s homes and criticizes other company’s work like it was done by blind monkeys.” BINGO BANGO!

Or Property Virgins? What could be better? Well, a lot actually. Like seriously, we get it. The word “virgin” is in your show’s title. You can take your foot off of the “it’s messy the first time” gas pedal. How many awkward, sexual innuendos can you crack in front of these innocent couples?

The best show on HGTV is by far House Hunters, and trust me, I’ve learned a lot from House Hunters over the years.

No matter what these people say to the real estate agent, the guy hardly cracks a smile. “Well I was diagnosed infertile at birth but we just had triplets so luckily we’ll need a 3 bedroom home”. Real estate agent blinks. Do these people have no emotions? Surely something must move these people. That or they’re just in it for the money, no passion. Just like an 1849 gold rush miner…or Chelsea Handler.

2. People put value in some weird shit. I saw an episode where the ONLY criteria this husband had, was that he needed room for his keg-o-rator. Am I saying that right? I wouldn’t know, because I typically buy my beer in a can. You know, I have someone else do the hard part for me. “Oh, you have a keg-o-rator? That’s neat, I guess. Do you buy your livestock while it’s still alive and kill it here?”

And almost every episode has some bat shit crazy woman who doesn’t think she has enough room to “entertain”. Entertaining? What are you planning on hosting, a full scale cat circus? 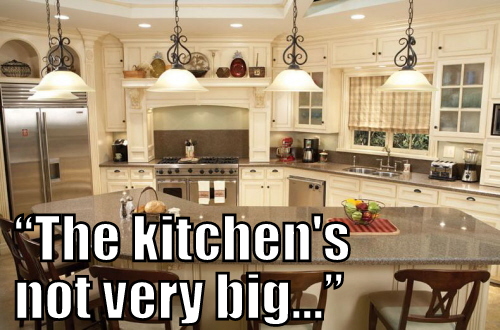 I bet your 500 square foot kitchen is gonna do the trick. Alls you really need to “entertain” is a small room, a large group of people, Finnish Suicide Rage Music and  …some soda…

Large spaces to “entertain” is what these women put value in. Maybe I’m the crazy one. I typically live by the “we’ll make it work mindset”. When I was looking for an apartment, I didn’t look for a closet the size of a large library. But that’s just me.

There’s compromise, and then there’s what these people are sometimes forced to do. Now, half of this is because I think people tend to believe they can get more for their money than they really can, but it’s still fun watching people sweat over 3 shitty options that don’t really fit the wish list.

Home Buyer: We’re looking for a home in Baghdad so we can finish what George Dubya Bush started!

I’m willing to bet there are a hundred more reasons why this show is so kickass. In fact, lemme check the interweb for a few more reasons.

No, that can’t be right. This must be one of those fancy comedy websites. I heard they’re popular these days (lol).

What?? House Hunters typically only picks couples who have already bought a house? Then they just take them around to two fake options and have them pretend they’re considering something else??

WHAT THE FUCK?! This is like that time I tried figuring out Mormonism. What the fuck is going on right now??

Holy shit. My world is DONE. I have NOTHING to live for. House Hunters was like watching a fantasy dream happen in front of my eyes. House Hunters helped me to escape this dull reality and realize that you can do anything…with a sizable budget and a willingness to lose counter space if you want don’t want that island.

I’m in a dark place right now. I’m going to go drink a bottle of cough medicine and cry myself to sleep…while taking a cold shower.

2 thoughts on “HGTV’s House Hunters: My Only Source of Happiness”