Do you ever wake up feeling tired despite the fact you just slept for 7 hours? Do you ever find yourself craving a nap by 10 in the morning? Unless you’re a robot, you’ve probably experienced one or both of these situations in the past month. Despite the fact that most of us do it everyday, waking up isn’t easy. Maybe you drink heavily every night. Maybe you spend time with your significant other playing Monopoly into the wee hours of the morning. Whatever the reason, plenty of people have a hard time waking up. To help the masses the Barnyard Lampoon has created a comprehensive guide on how to wake up easily, with a slew of possible side effects.

This guide, compiled by top scientists, teaches you how to wake up with common, every day household items. And drugs.

*Barnyard Disclaimer: All of these options have the possibility of stopping your heart.*

Plain old coffee? What is this, 1935? Ha, Depression reference? Check. Coffee is for old people to clean out their systems. It’s not very high class to wake up with something they hand out for free at Jiffy Lube, hospitals, and homeless shelters. But maybe you have a pound of coffee on your hands. Lemme tell you how to get rid of it. Espresso, an Italian coffee-type drink is like drinking a punch in the nose. It’s gonna wake you up. Sort of. To make espresso, you put the espresso grounds in a pot and add water. But stop right there. Switch the water with coffee and BOOM. That’ll wake you up.

Most people think you can only use a car battery to run a car. But most people are idiots. So the next time you’re feeling groggy upon waking, wrap you hands in aluminum foil, go out to the garage, start the car, pop the hood and grab both the positive and negative electrodes. If you do it wrong, it will spark really bad and set your garage on fire when a spark lands on some gasoline soaked car part. Best-case scenario you’re going to get 14 volts to the dome piece. Try going back to sleep after that. Hint: you wont be able to.

Side effects to expect: you may blow every hair off of your head, your heart may explode, or the electricity may exit out the wrong part of your body resulting in a nasty amputation and having to hire a third party cleaning company to clean your garage floor.

If you wanna wake up with 5 hr energy, that’s fine, but remember that means you’re a hopeless piece of white trash. 5 hr energy is marketed to car mechanics, janitors, and garbage truck drivers. Class A people right there. Dammit, sometimes I’m too bourgeoisie for this shit. Part of being high society is taking white trash shit, and making it classy. Like what they did to croquet in the late 1800s. Here’s how to do it on the cheap. Buy six 5 hr energy shots and a 2 liter of Sprite. Drink the Sprite down to the label. Add the six shots and shake it up for about a minute. Park your car someplace (you DO NOT want to be driving when you do this) and chug the entire thing. Now buckle your figurative seat belt because it’s about to get hairier than anything you’ve ever experienced. The last time I did this, I ended up getting out of my car via the windshield. I was still buckled into the driver’s seat. I ripped it out and took it with me. And hour later I was shirtless running through the McDonald’s drive through.  The person at the first window (who denied me service for whatever reason), morphed into my dead Grandmother and told me to build a baseball field so my dead father would come back and play catch with me. I did it, in 54 minutes. I also got arrested because I stole all the supplies. My father isn’t even dead. And he never played baseball for the White Sox. Maybe I should go back to rehab…

Side effects to expect: You’re going to drool A LOT. And judging by some recent tests done by Stanford Medical Center, this drool could power an electric golf cart. Oh, and you’re going to ruin some aspect of your life that you’ve been working very hard to maintain. Deal with it.

For whatever reason cocaine went out of style in the 80s. Have you ever done this shit? It’s like Red Bull from angels. Blast that shit into a nostril and you’re not sitting still for a while. Eh, “a while” may be an exaggeration; cocaine typically only carries a 5-10 minute high. Now cocaine is all “taboo” and looked down upon by our society. I say, who are we to judge? As Confucius once said “Let he who lives in a glass house, snort lines off of the roof”.

Side effects to expect: Addiction and some other bullshit

This one’s for you, Missouri. Meth is great because you can cook a wicked batch of it in your bathtub. I like a moderate amount of danger in everything I do, so what’s better than meth production? You can do everything correctly and it still may explode on you. Want real estate on the cheap? Go to Missouri and find houses that have had one side blown off from a meth lab exploding. That will knock a few thousand off of the asking price.

Side effects to expect: See above

When I got a nasty cold in high school, I was prescribed nasal spray with epinephrine in it. Whew doggy. After a couple of sprays of that stuff I was noticing I could do stuff a lot faster than normal. I vacuumed the basement in MINUTES. If you wake up in the morning and give 6 puffs into each nostril, you’re going to be on your way before you know it. And while I apologize for how graphic my next comment is, it’s necessary. Too much of this stuff will give you an erection. Go watch the film Crank if you don’t believe me. I also one time got a shot of epinephrine to the chest. GOOD MORNING! I didn’t go to sleep that night. Which was all right, because I was hospitalized.

Side effects to expect: Erections…

-What I like to call a Pulp Fiction Alarm Clock, which is really just a synthetic adrenaline shot to the heart. See above.

When I studied abroad in Australia an Aborigine shot me in the neck with a poison tipped arrow. For whatever reason, I was immune to the poison but I didn’t sleep for 4 straight days. Track that stuff down and put it into pill form. I don’t remember where I was.  But I still have a scar on my neck; the asshole got me right in the jugular. And it was all a big misunderstanding over shaking hands, which to their culture is like giving someone the middle finger. How was I supposed to know? Aborigine Dinner Dates for Dummies didn’t have a chapter on that.

But he did shoot the arrow out of a Didgeridoo, which is neat. 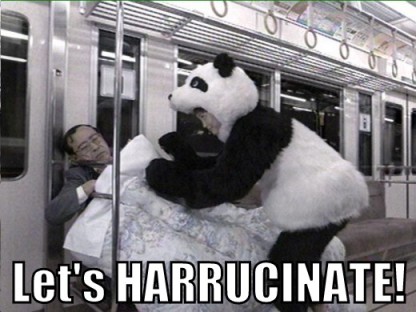 So looking back on these suggestions, I’m realizing that a majority of them are drug based. While that isn’t ideal, you gotta do what you gotta do, am I right? You can be tired at work, or you can consume the right substances and sleep for two hours a night. The choice seems clear to me…but I’m also no longer allowed in any Home Depot location. Anywhere. Ever.