Michigan is a state that’s essentially known for a rundown industrial city full of crime and abject poverty. That’s a bad start. Come to find out, the rest of the state isn’t much better. While there are certainly beautiful aspects of the state, they tend to be the parts that humans haven’t touched. Stunning views of Lake Michigan’s seemingly endless horizon: no credit to humans. A vast expanse of dense forestry: no credit to humans. The 50 cheap motels jammed into one block of lakeside property: all humans.

I stayed in the northern most part of the Lower Peninsula. Quick geography lesson; Michigan is split into two separate but “unified” pieces, The Lower Peninsula and the Upper Peninsula. I know, it’s super complicated. I’ll get into the cultural differences of the two later. I stayed in an area called Mackinaw City, named for its proximity to Mackinac Island. Mackinaw City and the island flourished in their early years because of the fur trade. And if you have even a little common sense, you’ll be able to guess that didn’t last long.

French Fur Trader: So our entire economy is based on a medium sized rodent with a limited population that possesses a fur that countries half the world away use to create a hat that’s popularity is most likely fleeting? Makes sense to me, let’s get to it!

After they drove the beaver population into the ground, the French, British, and local Native Americans turned to agriculture and hating each other.

Fast forward some 280 years and you have one of the biggest tourist traps in the world. Somehow, an area that was founded by French Jesuits and a calm Native American people erupted into an unstoppable force of fudge and popcorn shops and forty-four dollar-a-night motels. I have literally never seen more fudge and popcorn shops in my life. Mackinaw City somehow exists in a bubble that is outside of the normal economic time and space of the reality you and I know. Let’s consider a normal street, in a normal town. In one shop, there may be a baked good that is specific to that shop. It probably has a unique name, with a very unique product. Next door to this shop is a completely different shop, with a different name, and a very different product. This is because most people don’t get the same item from three similar stores located right next to each other. Everything that I just described does not apply in Mackinaw City. In Mackinaw City, on one corner, there may be a store called The Popcorn Factory. Literally NEXT DOOR is a store called The Popcorn Place. They literally sell the EXACT same item (floor-to-ceiling-tubs of flavored popcorn). No differences, immense similarity and yet somehow they both survive. To make it even more strange, these popcorn shops are almost exclusively run by young Russian women. There are some dirty places you could take this, but I’m being straight up serious. If you walk into one of these popcorn shops at least two young girls will ask, in a Russian accent, if you want to try a sample of Dill Pickle Popcorn.

Either they’re all on some sort of international work program, or the US ended the Cold War by promising to employ young Russian women for the next 60 years. I can proudly say that I didn’t buy a single kernel of popcorn while I was in Mackinaw City. My great-grandmother was Russian, so their bullshit mind tricks don’t work on me. But shit, do they use mind tricks. Every store or restaurant in Mackinaw City either says “award winning” or “homemade” in the window. First of all, some of the most successful restaurants in the world have never once claimed to be homemade. Or award winning for that matter. Second of all, what the hell does that even mean? Award winning? All right, pretty straight forward, but what governing body issued the award? What award did you actually win? For all I know you could have won the “least likely to give someone food poisoning award”. Congrats on winning that, but it doesn’t mean I want to eat at your restaurant. And supposedly “homemade” means it was made right there in the store. Fuck you, that’s called “storemade”. Where’s the FDA when you need them?

Anyway back to the popcorn stores, let’s say you’re craving some Chicago Cheese flavored popcorn (they have it). You buy a bag and start munching on it before you even leave the store. Besides some mental defect that may be affecting your patience, you’ve got a MAJOR problem. Namely about 3,000 seagulls that hang out around Mackinaw City and terrorize the unsuspecting inhabitants.

BL Reader: Seagulls? Mackinaw City is in a lake, you dipshit

Somewhere, somehow a bunch of seagulls hopped on a boat and made their way into every single Great Lake. It’s fucking madness. I guarantee some unsuspecting asshole floated into one of the great lakes with a seagull on the railing of his ship thinking they were kickass. Pretty soon they’re mating, creating hundreds of babies, and eating all of his soft-pretzels.

Great Lake Sailor: God DAMMIT! What have I done?!

Seagulls are like the stoners of the bird world. For the following reasons: 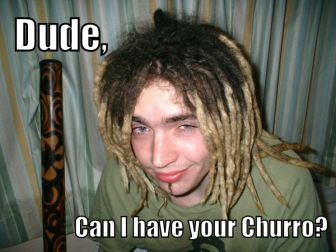 -They claim to be “aquatic”, but they very rarely actually get in the water. Stoners are always like “Bruh, I grew up surfing…” but haven’t touched water in 15 years. Dreads? Don’t happen by touching water.

-They hang out in annoying little groups. Seagulls hang out in groups of threes squawking back and forth like stoner hippies in a drum circle. Ever heard a stoner defend how “awesome” Dispatch is? It’s like listening to a seagull make the most annoying noise in the world.

All right, so you got your popcorn stolen by a pack of stoned seagulls. Discouraged, you head back to your hotel. Brace yourself, they’re super shitty. It would seem that motels and hotels in the area challenge each other in terms of who can still live in the 90s. Internet is almost nonexistent, and the décor would make Zack Morris stiff in the pants. To make matters worse, the hotels are almost exclusively staffed by Jamaicans. For whatever reason, these Jamaicans are extremely pissed off and irritable. I’d imagine it has something to do with the cliental. Mackinaw City does not attract people of high culture. When the Jamaican’s aren’t working at the hotels, they either run Olympic sprints or collect recyclables which they bring to some factory where they make money (I’m not a liberal hippy, I don’t know how it works).

Because “Diluted Michigan” would be a disappointment.