One man was a cult leader who deceived thousands while proclaiming he picked up where  Jesus Christ “left off”.

The other man was a C-List actor (and even that’s generous) who was best known for depicting an imprisoned black man in the film The Green Mile.

So what do these men have in common?

Absolutely nothing, aside from the fact that they both died while I was in New York City.

And yet, maybe there’s more. Maybe they passed into the great beyond with more of a connection than anyone knows. The first connection I can think of is the stifling apathy that accompanied both of their deaths. Michael Clark Duncan passed away (in what was most likely the world’s largest hospital bed) and a previously unseen amount of C-List actors took to social media to describe the man that they barely knew, but would miss so much. And that’s where it stopped.

Michael Clarke Duncan hailed from the only city in America with an inferiority complex. And while his Chicago upbringing may have influenced him personally, it didn’t do much to propel him forward in Hollywood. Granted, he’s acted in more films than you and I have starred in, but that doesn’t save him from being relatively unknown. In fact, when he died and I looked up his picture I found myself asking “was he in Friday with Ice Cube?”

You may also remember MCD (I just came up with that, feel free to use it) as Tom Robinson in To Kill A Mockingbird.

Other than that, he wasn’t in much.

And then there’s Sun Myung Moon. Where do I begin?

How about here: he was a delusional, narcissistic cult leader. Moon had South Koreans (and some Americans) believing that Jesus Christ told him to clean up shop. For those of you non-believers, suggesting that Jesus Christ didn’t quite “finish the job” or somehow needed help accomplishing his goals, is a pretty heinous sin. And even if you don’t believe in Christianity, it’s just downright stupid. That would be like a hipster thinking that Steve Jobs just didn’t quite go all the way on making a music storage device so they make their own whacked out company. Wait, did I just compare Steve Jobs to Jesus Christ? Moving on!

Moon is most famous for marrying over 2,000 couples at once in Madison Square Garden. Other than that, it was a long life (died: age 92) of deceiving Koreans and evading taxes. His business sold the following items: cars, guns, newspapers, and sushi. So half of his company is supplying the materials for the Bad Boyz movies and the other half is fueling all the Asians you see eating sushi on the D train. That’s what you call an Asian Badass. 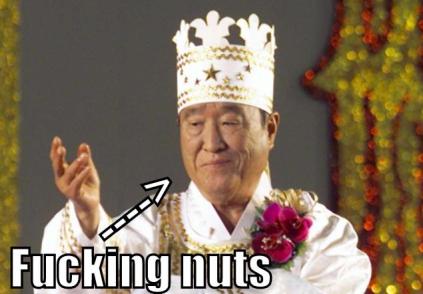 You know, if I didn’t know any better, I’d say the trajectory of Moon’s life is eerily similar to that of BL Man of the Century Kim Jong Il. The Koreans, the deceit, the odd likes and dislikes. Except, Moon was extremely anti-communism. To the point he actually supported Richard Nixon. What a dipshit, am I right?

MCD and Moon shared a deep compassion for their fellow man. MCD was supposedly a great guy to work with, and Moon called homosexuals “dirty, dung-eating dogs”. Wait…

Okay, so maybe Moon wasn’t so compassionate. In fact, Moon went so far as to blame the Holocaust on the Jews, because they turned Jesus over to the Romans. Wow, this guy made a career out of skewing the life of Jesus Christ. To be honest, with people like Moon running around, I can see why some people aren’t so fond of religion.

So maybe MCD and Moon didn’t have much in common. They both passed away, but they both left something behind. While it may not be the most significant body of work in the history of humanity, they both accomplished something that will be seen by generations to come. And I can make fun of them all I want, but will people say the same about me when I die? Probably not, especially if this website is any indication.