Ray Lewis, the eccentric and zealous Baltimore Ravens linebacker, had one hell of a game last night versus the Patriots. In fact, he killed it.

He murdered the Patriots offense.

He was absolutely homicidal.

No matter what play Tom Brady ran, Ray Lewis was able to pick up on it, and snuff it out. Just grab it while it was sleeping, put a pillow to its face, and snuff out the play until its legs stopped kicking and everything went limp.

At one point, Ray Lewis was going to be charged with a penalty; but then at the last second, against all odds, he was let off! Which is not at all like anything that has happened in his personal life. 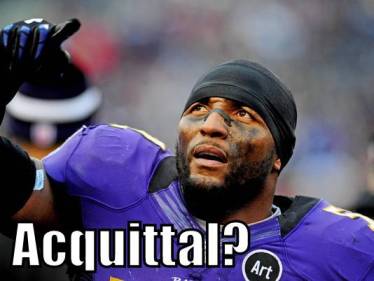 Do you get it? Is it sinking in? Let me be clearer:

Ray Lewis is a murderer. If they win, his Superbowl party will have a body count.

Don’t let all the Jesus talk and squirrel dancing fool you, Ray Lewis is a maniac. He eats grass to get psyched up for sports. He eats foliage.

In two weeks the maniacal force that is Ray Lewis will descend upon the unsuspecting city of New Orleans. And if there is one thing that city doesn’t need, it’s someone like Ray Lewis running around with some extra free time.