I knew this day would come. Hugo Chavez was one of the last great dictators, but even Hugo “The Sensation” Chavez had to die. No one can avoid death, not even psychotic dictators with an overload of narcissism, and a touch of insanity. A lot can be said about Hugo Chavez, for instance: 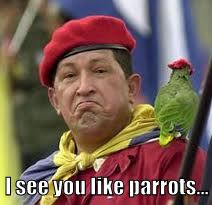 No one is entirely sure where his love for parrots came from, but it’s probably the result of some creepy thing that happened during his military service.

We also known that he was prone to croquet induced headaches

When you take a wooden croquet ball to the dome piece, head trauma and concussions are right around the corner.

We also know that he succumbed to tragic dictator stereotypes and cliches, i.e. giant murals of his own face. 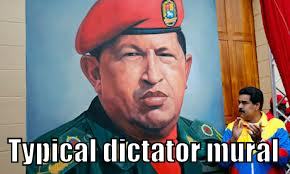 Working for Hugo Chavez must have sucked, although it couldn’t have been any worse than Steve Jobs. Seriously, he made a wicked music storage device, but the dude was an asshole. But back to Chavez…

I’m sure his temperament, attitude, elitism, narcissism, and cruelty made him a difficult boss, but seriously…you’re not making a case for yourself as a Hugo Chavez employee when you put his microphones this close to his damn mouth. 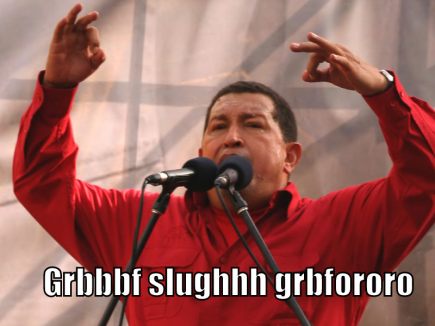 We also know he has an uncanny resemblance to Miguel Cabrera.

But if being a dictator is a board game, this dude was passing go AND collecting 200 dollars. He knew what was up. Consider his potent hatred for George W. Bush. While in office, he called Bush a:

And the best part is, we can’t argue with any of those! The dude knew what was up. But hating the Commander-in-Chief of America? That’s dictator as shit. In fact, at a UN assembly, Hugo Chavez took the podium and claimed the podium STILL smelled like SULFUR from George FUCKING DUBYA Bush. Sulfur?! How in the fuck did he know Bush was using sulfur deodorant?