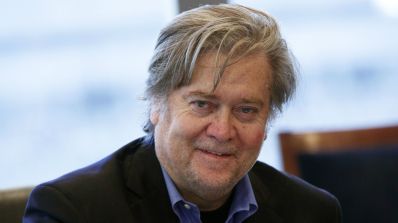 By now you may have heard that I was fired by President Trump from my cush position as White House Chief Strategist. If you think I got fired because of recent events like the protests in Charlottesville, you’re a naive idiot. Simple fact of the matter is I was soaking up too much spotlight, and that has nothing to do with my sizeable girth. But either way a fair number of fans seem to be worried about me, like getting fired will somehow slow me down.

Don’t worry about me, I’ll be fine. When you’re not taking care of a petulant man-child, you suddenly have a lot more time on your hands. I recently took up Cross-Fit, which you may be confusing with CrossFit, the popular exercise enterprise. Cross-Fit is actually a volunteer organization that assembles crosses for Ku Klux Klan cross burning ceremonies. I also hopped on Tinder and Bumble, hoping to find a fourth woman to marry and divorce. And I got a library card at my local branch, but they didn’t have Mein Kampf so I put it on hold.

Oh and I don’t know if you saw the news (since it wasn’t covered by any #FakeNews organizations), but I’m back at Breitbart. People seem to think by getting fired, I lost my platform. But let me make this VERY clear: if you thought you could silence Bannon the Cannon, you’ve got another thing coming! I have my hands on my weapons again. By being able to put all of my energy back into Breitbart (as opposed to SOME of my energy, because if you think I stopped working for them while I was in the White House, you’re a sucker) I will be able to bring this worthless regime down from the outside. But I actually support Trump and his initiatives, so I guess “bring the regime down” actually means “remove the Jews still working in the White House.” Trust me when I say Breitbart has plans for a few exposés on that hook-nosed heeb, Kushner.

Dammit, my therapist said to watch the antisemitism because when I think about Jews too much I get so stressed that blood bubbles to my face and erupts out of bizarre cracks in my lips and cheeks. Which reminds me, while I have your attention, I’m also looking for face cream suggestions. I’m looking specifically for something with an anti-aging element, and also something that will prevent the progressive disease that’s clearly melting my face. I went to a dermatologist here in D.C. and she literally quit her practice after I left.

Anyway, once again, don’t worry about me. As that colored rapper Kendrick Lamariquan or whatever his name is said, “we gon’ be alright.” Keep fighting the good fight!

One thought on “A Letter From Steve Bannon”